Collective Flushing – a measure of nationalism

Benedict Anderson’s wonderful book on nationalism Imagined Communities introduced the idea of simultaneity. Print media, back in the day, especially in vernacular languages (i.e. not latin) enabled the reading of the same ideas in different places at the same time (i.e. the morning paper) for the first time. This, he stated, created unity and a form of distributed collective identity, a disparate community bound by ideas, in some cases forming a nation.

Eduardo Galeano, in his book Soccer in Sun and Shadow did the same as Anderson, in his case it is not through print media but instead soccer that community, a shared identity and a nation are created:

“All Uruguayan babies are born crying, ‘goal’,” the Uruguayan writer and soccer aficionado Eduardo Galeano said over coffee recently. Perhaps, that’s how a country of three million or so could have won two World Cups and two Olympic gold medals. It also helps explain the country’s level of despair after Uruguay’s dramatic World Cup elimination at the feet of the Australian Socceroos last November in a penalty shootout.

In Canada, some say it is Hockey. In my case, I would say, Olympic Hockey, as I do not pay attention to the sport at any other time, it is just not a part of my reality, it is not a marker of my identity. Yet, like millions of others, I demonstrated a sense of patriotism and participated in the national act of watching the Canada – US Gold Medal men’s Game.

And what does that have to do with data? Well, back to simultaneity – more so the measuring of it.

EPCOR, the water utility in Edmonton measured water consumption during the game, and as seen in the graph below. 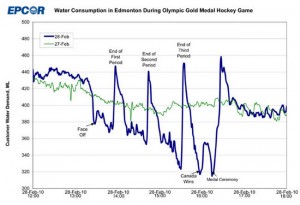 “The chart does tell us that Edmonton hockey fans are pretty dedicated,”

Water use plummeted below normal right at the 1:30 p.m. faceoff time.

Usage held around 370 megalitres (ML) until the first intermission, when use skyrocketed to 450 ML within minutes.

There was less water used during the second period and even less in the third.

Use dropped to 320 ML near the end of the game, when the U.S. scored a tying goal at about 3:30 p.m., and again when Sidney Crosby scored the winning goal in overtime.

Usage skyrocketed to 460 ML immediately after the medal ceremony.

It’s assumed most of the spike is due to bathroom use, said le Riche, though it would also include water used in the kitchen and in bars.

Data analysis at its best!

Via:
Flowing Data: Canada: the country that pees together stays together
Pat’s Papers: What If Everybody in Canada Flushed At Once?
Edmonton Sun: EPCOR charts fan flushes
Smart Planet: Infographic: Water consumption in Edmonton, Canada during Olympic gold medal hockey game