You are currently browsing the monthly archive for January 2009.

The call for a US National Data Agency (NDA)

January 26, 2009 in Uncategorized by Tracey | Permalink

January 26, 2009 in Uncategorized by Tracey | Permalink

Zara over on CivicAccess.ca forwarded the following Free the Facts story to the list.  It is a really great way to get the issue across.  I also love flickr being used in that way! 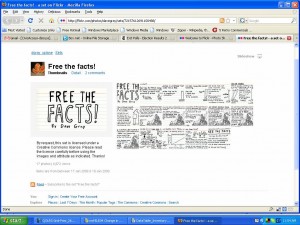 I have been neglectful of this wonderful space and am now getting back to it!  As a warmer upper, Hugh, suggested that I post the following that I sent to the CivicAccess.ca list.  I have been doing lots of thinking in this area, and I have decided to pursue a PHD on the topic of data access in Canada and hope to share some of my readings & findings as I go along.

In addition, I have been reading lots of great data laden reports in public health, on the topic of quality of life, and collecting data from a multitude of sources that I will get to talking about at some point.  Until then you can read some of the documents and reports that I have tagged here and here.

So these days I have to write a proposal, and it involves data, infrastructures, and geographic imagination. And as I was reading an article about criminological data models, governmentality, and biopolitics I came across this fellow Ian Hacking.

Prof. Hacking wrote about how:

Ian Hacking is a Canadian Philosopher and a fellow at the College de France – the only anglo accepted thus far – same schools as Michel Foucault.

Why do I care and why am I sharing this?  Well, it has to do with access to data and who is creating the categories we come to live by and believe, what it means when government rationalization comes in the form of statistics discussing populations, and that only the government and wealthy organizations have access to the means to those rationalizations.

During the course of proposal writing I re-read the Chapter on the Census, Map and Museum in Benedict Anderson’s Book Imagined Communities.  He discusses how these three institutions were instrumental at framing the colonial gaze in Asia.  He also explained that these institutions told us more about the colonial mentalité and less about those they being counting, mapping and whose artifacts got collected.  Finally, he demonstrated how these institutions and the categories, territories and anthropoligies eventually got believed by the local, re-puporsed, acted and performed in reality, eventually, becoming ancestors.  Bref – manufacturing an odd imagination of who one is.  Those who counted, mapped and assembled got to tell the stories.  And it is these stories that left traces.

After reading about Ian Hacking’s work, I listened to a CBC ideas interview with him.  Brilliant! He discusses taming chance, statistical thinking, normativity, wanting to be normal and adapting to categories which make up people and shape a type of social reality.  Access to data I think is about enabling more than a few to question, assess and shape reality.  It is also about questioning who has the monopoly on the data that allow us to interpolate the terrain of our geographic imagination – who we are, our identity, issues, how we see ourselves.

Andrew Pickering, who studies the sociology of science, was also interviewed by Paul Kennedy in the same Ideas program, and he brought up Deleuze and Guattari’s concept of nomad science vs royal science.  The latter a science that continues to support the known and accepted ways of doing things the former a more distributed form of science out of the academe.  I think web 2.0, open access, open source, open data are about nomad science – which i will explore a little more.

I then listened to Brian Wynne, a Prof. of Science Studies in the same ideas series but a different show who discussed how science and technology somehow are beyond the realm of politics.  He discusses in his work on The Public Value of Science how some sciences are imagined, how these are delusions, and are provocations and how these are constructed in the public mind.

I am trying, in my own work, to get at the idea that data help us form a picture of reality, and the more of us that get the opportunity to play with them, learn about them, value them, the more pictures we may create that may invert, contest and change something, question what we are currently being told in an educated way, wonder about what we are not told, what is silenced or worse just plain ignored, how our imagination is shaped, ways we may want to shape it and some new social realities we may want to aim for.

Or to use a term from a lecture given by Darin Barney, I think data are part of the means by which we can do citizenship, doing citizenship involves judging and acting on that judgement, and I believe that data are an integral part of making good judgement upon which to act.

as an FYI The entire CBC lecture series on How to Think about Science is just plain great.