Marilyn Waring contributed to the inspiration for the questions on Unpaid Work that were part of the Long Form Census (1996, 2001 and 2006).  The National Film Board of Canada (NFB) has a copy of the film for free viewing: Who’s Counting: Marilyn Waring on Sex, Lies and Global Economics.  It is well worth the time to watch and learn about how those questions came about and why they are so important. I saw the film at the Main Public Library a couple of times, usually shown just before Census Day.

These questions were scrapped by the “New” Government and for some odd reason, the National Statistics Council recommended that these questions be removed as part of their compromise offer to the Conservative Government.  It is claimed that this was the series of questions that generated the most inquiries.  Hmm!  What was the nature of the complaints and who made them?  I wonder if the anti childcare, stay at home & back to the kitchen, Tory lovin’ lobby called REAL Women had a posse working the phones!  ( I will inquire!)

As Stockwell Day indicated today (ahum) on the topic of ah, crimes stats, how can we know if things are not counted, but that does not mean we do not build an entire infrastructure of prison, just because we don’t know (ahum ahum). Hey does that mean we get daycare? Social Housing? Income supports and removal of claw backs for sole support parents? etc.  The argument used to be, show us the numbers.  The real numbers are gone, so we just have to communicate with our imaginary friends and make stuff up – alarming rate of un-reported crime – go figure ay. Well, it seems that with this government, the numbers just don’t matter.  Oye veigh!

Marilyn’s Book Counting for nothing: what men value and what women are worth was my first encounter with critical thinking and data.  I was in New Zealand and the friends I was staying with gave me the book as a souvenir!  It might be time to read it again!

33. Last week, how many hours did this person spend doing the following activities:

(a) doing unpaid housework, yard work or home maintenance for members of this household, or others? Some examples include: preparing meals, washing the car, doing laundry, cutting the grass, shopping, household planning, etc.

(b) looking after one or more of this person’s own children, or the children of others, without pay? Some examples include: bathing or playing with young children, driving children to sports activities or helping them with homework, talking with teens about their problems, etc.

(c) providing unpaid care or assistance to one or more seniors? Some examples include: providing personal care to a senior family member, visiting seniors, talking with them on the telephone, helping them with shopping, banking or with taking medication, etc.

These were just after education and just before paid work.  There is no long form Census for 2011 (so far anyway), there is this thing called a voluntary survey, and it does not include the questions on unpaid work. 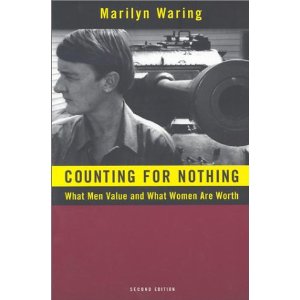